Welcome to the Oz TV Wiki
The wiki about the HBO Drama Series, Oz, that anyone can edit. Please note that this site is full of spoilers.

Oz is an American television drama series created by Tom Fontana. It premiered on July 12, 1997 as the first one-hour crime-drama television series to be produced by premium cable network HBO. The series ran for six seasons, accumulating a total of 56 episodes and concluding with the finale which aired on February 23, 2003.

"Oz" is a shortened form of "Oswald" in depicting the Oswald State Correctional Facility, formerly Oswald State Penitentiary, a fictional, level 4 maximum-security state prison, possibly named after New York's Commissioner of Correctional Services, Russell George Oswald, who, in actuality, was the head of New York's penal system at the time of the Attica Prison riot. The nickname is a reference to the classic film The Wizard of Oz which is notable for popularizing the phrase: "There's no place like home"; in contrast, the series has used the tagline: "It's no place like home". 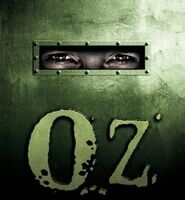 Add a photo to this gallery

Contribute to this wiki

To write a new article, just enter the article title in the box below.

Retrieved from "https://oztv.fandom.com/wiki/Oz_TV_Wiki?oldid=11330"
Community content is available under CC-BY-SA unless otherwise noted.